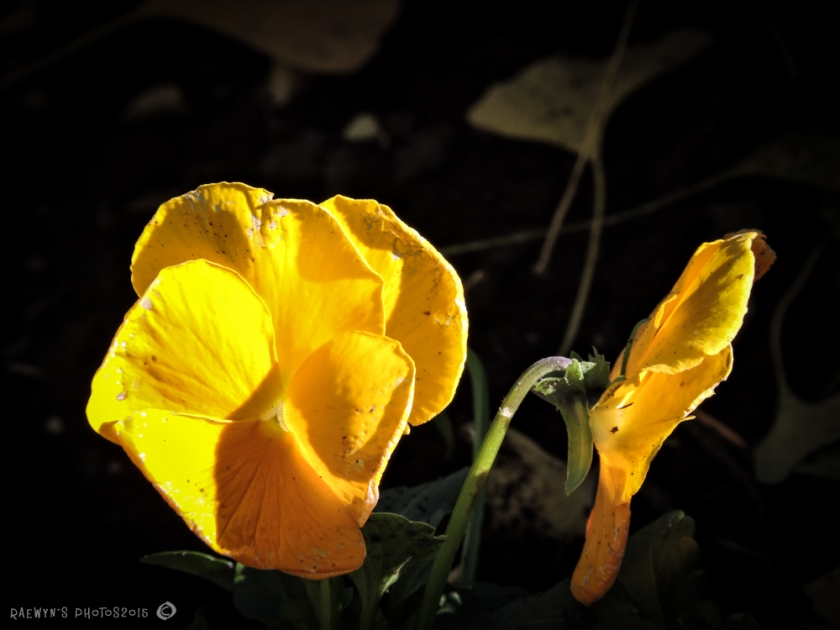 I love pansies.  They are so colourful and seem to withstand some cold temperatures.  They always provide such a show as well.  Great ground cover.

The garden pansy is a type of large-flowered hybrid plant cultivated as a garden flower.[1] It is derived by hybridization from several species in the section Melanium (“the pansies”)[2] of the genus Viola, particularly Viola tricolor, a wildflower of Europe and western Asia known as heartsease. Some of these hybrids are referred to as Viola × wittrockiana Gams ex Nauenb. & Buttler. For simplicity, the older name Viola tricolor var. hortensis is often used.

The garden pansy flower is two to three inches in diameter and has two slightly overlapping upper petals, two side petals, and a single bottom petal with a slight beard emanating from the flower’s center. These petals are usually white or yellow, purplish, or blue.[3] The plant may grow to nine inches in height, and prefers sun to varying degrees and well-draining soils.

English common names, such as “pansy”, “viola” and “violet” may be used interchangeably. One possible distinction is that plants considered to be “pansies” are classified in Viola sect. Melanium, and have four petals pointing upwards (the two side petals point upwards), and only one pointing down, whereas those considered to be “violets” are classified in Viola sect. Viola, and have two petals pointing up and three pointing down.[2][4][5] Another possible distinction is made by the American Violet Society – the International Cultivar Registration Authority for the genus Viola. It divides cultivated varieties (cultivars) in Viola sect. Melanium into four subgroups: B1 – pansies, B2 – violas, B3 – violettas and B4 – cornuta hybrids. On this classification, modern “pansies” differ from the other three subgroups by possessing a well-defined “blotch” or “eye” in the middle of the flower.[6]

Modern horticulturalists tend to use the term “pansy” for those multi-coloured large-flowered hybrids that are grown for bedding purposes every year, while “viola” is usually reserved for smaller, more delicate annuals and perennials.

The name “pansy” is derived from the French word pensée, “thought”, and was imported into Late Middle English as a name of Viola in the mid-15th century, as the flower was regarded as a symbol of remembrance. The name “love in idleness” was meant to imply the image of a lover who has little or no other employment than to think of his beloved.[7]

The name “heart’s-ease” came from St. Euphrasia, whose name in Greek signifies cheerfulness of mind. The woman, who refused marriage and took the veil, was considered a pattern of humility, hence the name “humble violet”.[7]

In the early years of the 19th century, Lady Mary Elizabeth Bennet (1785–1861), daughter of the Lord of Tankerville, collected and cultivated every sort of Viola tricolor (commonly, heartsease) she could procure in her father’s garden at Walton-upon-Thames, Surrey. Under the supervision of her gardener, William Richardson, a large variety of plants was produced via cross-breeding. In 1812, she introduced her pansies to the horticultural world, and, in 1813, Mr. Lee, a well-known florist and nurseryman, further cultivated the flower. Other nurserymen followed Lee’s example, and the pansy became a favorite among the public.

About the same time that Lady Bennett was busy cultivating heartsease, James, Lord Gambier was doing the same in his garden at Iver under the advice and guidance of his gardener William Thompson. A yellow viola, Viola lutea, and a wide-petalled pale yellow species of Russian origin, Viola altaica were among the crosses that laid the foundation for the new hybrids classed as Viola × wittrockiana, named for the Swedish botanist Veit Brecher Wittrock (1839–1914). A round flower of overlapping petals was the aim of some early experimenters; in the late 1830s a chance sport that no longer had narrow nectar guides of dark color on the petals but a broad dark blotch on the petals (which came to be called the “face”), was found. It was developed in Gambier’s garden and released to the public in 1839 with the name “Medora”.

By 1833, there were 400 named pansies available to gardeners who once considered its progenitor, heartsease, a weed. Specific guidelines were formulated for show pansies but amateur gardeners preferred the less demanding fancy pansies. About this time, James Grieve developed the viola and Dr. Charles Stuart developed the violetta, both smaller, more compact plants than the pansy

The pansy’s connection to pious humility is mentioned by Harte, who writes: “From brute beasts humility I learned;/And in the pansy’s life God’s providence discerned”.[10] Gifford evokes both Christian and classical undertones, writing how “Pansies – still,/More blest than me, thus shall ye live/Your little day, – and when ye die,/Sweet flowers! The grateful muse/Shall give a verse”.[10] Smart proposes “Were it not for thee, oh sun,/Those pansies, that reclining from the bank/View through the immaculate, pellucid stream,/Their portraiture in the inverted Heaven,/Might as well change their triple boast, the white,/The purple, and the gold”.[10]

On account of its popularity in both society and its recurring appearances in Romantic poetry, a variety of new nicknames for the flower began to circulate. Dorothea Lynde Dix proclaims that “Perhaps no flower (not excepting even the queenly rose) claims to be so universal a favorite, as the viola tricolor; none currently has been honored with so rich a variety of names, at once expressive of grace, delicacy and tenderness.”[10] Many of these names play on the whimsical nature of love, including “Three Faces under a Hood,” “Flame Flower,” “Jump Up and Kiss Me,” “Flower of Jove,” and “Pink of my John.”[17]

Nathaniel Hawthorne published his last literary effort, an unfinished piece, entitled Pansie, a Fragment, sometimes called Little Pansie, a fragment in 1864. D. H. Lawrence‘s Pansies: Poems by D. H. Lawrence was published in 1929, and Margaret Mitchell originally chose Pansy as the name of her Gone with the Wind heroine, but settled on Scarlett just before the book went into print.

In the visual arts, Pierre-Joseph Redouté painted Bouquet of Pansies in 1827, and, in 1874, Henri Fantin-Latour painted Still Life with Pansies. In 1887, van Gogh painted Mand met viooltjes, and, in 1926, Georgia O’Keeffecreated a painting of a black pansy called simply, Pansy and followed it with White Pansy in 1927. J. J. Grandville created a fantasy flower called Pensée in his Fleurs Animées. The 1951 Disney animated film Alice in Wonderland featured a chorus of singing pansies in the Garden of Live Flowers scene.

Because its name means “thought”, the pansy was chosen as a symbol of Freethought[18] and has been used in the literature of the American Secular Union. Humanists use it too, as the pansy’s current appearance was developed from the heartsease by two centuries of intentional crossbreeding of wild plant hybrids. The specific colors of the flower – purple, yellow, and white – are meant to symbolize memories, loving thoughts and souvenirs, respectively.[9] The Freedom From Religion Foundation (FFRF) uses the pansy symbol extensively in its lapel pins and literature. The flower has long been associated with human manner, as one man cleverly stated: “Nature sports as much with the colours of this little flower as she does with the features of the human countenance.”[17]

In William Shakespeare‘s A Midsummer Night’s Dream, the “juice of the heartsease” is a love potion and “on sleeping eyelids laid, will make a man or woman madly dote upon the next live creature that it sees.” (II.1).

In the language of flowers, a honeyflower and a pansy left by a lover for his beloved means, “I am thinking of our forbidden love”. In 1858, the writer James Shirley Hibberd wrote that the French custom of giving a bride a bouquet of pansies (thoughts) and marigolds (cares) symbolized the woes of domestic life rather than marital bliss.[19]

A German fable tells of how the pansy lost its perfume. Originally pansies would have been very fragrant, growing wild in fields and forests.[9] It was said that people would trample the grass completely in eagerness to pick pansies. Unfortunately, the people’s cows were starving due to the ruined fields, so the pansy prayed to give up her perfume. Her prayer was answered, and without her perfumed scent, the fields grew tall, and the cows grew fat on the fresh green grass.[9]

American pioneers thought that “a handful of violets taken into the farmhouse in the spring ensured prosperity, and to neglect this ceremony brought harm to baby chicks and ducklings.”[9] On account of its place in American hearts, a game called “Violet War” also arose. In this game, two players would intertwine the hooks where the pansy blossoms meet the stems, then attempt to pull the two flowers apart like wishbones. Whoever pulled off the most of their opponent’s violet heads was proclaimed the winner.[9] Young American settlers also made pansy dolls by lining up the pansy flower “faces”, pasting on leaf skirts and twig arms to complete the figures.[9]

The pansy is also used in phytotherapy.[20]

There is so more information to be found at:

These photos were taken at Frimley Park.