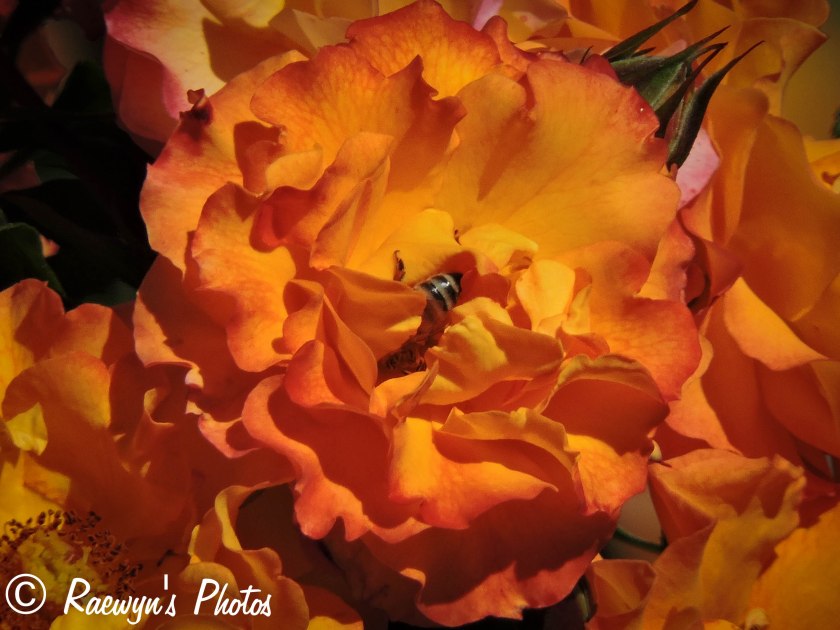 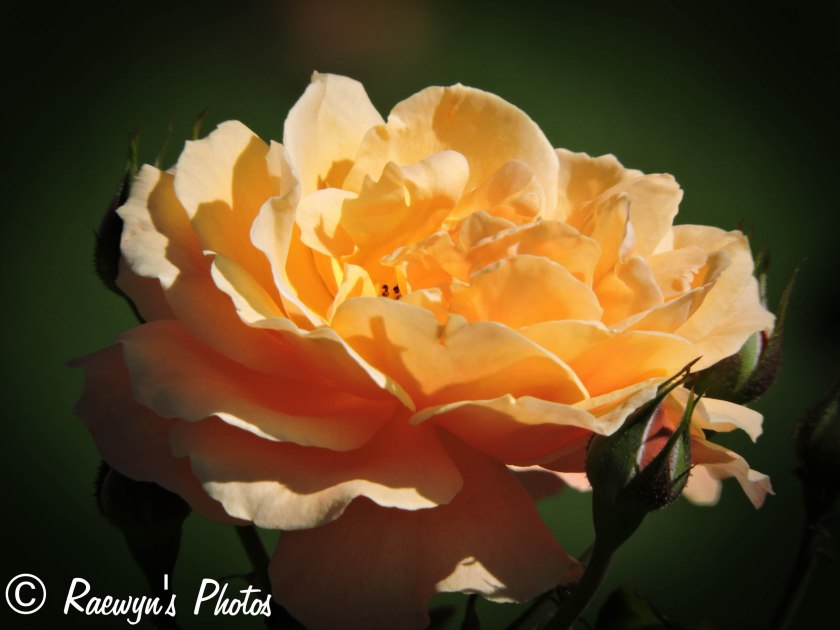 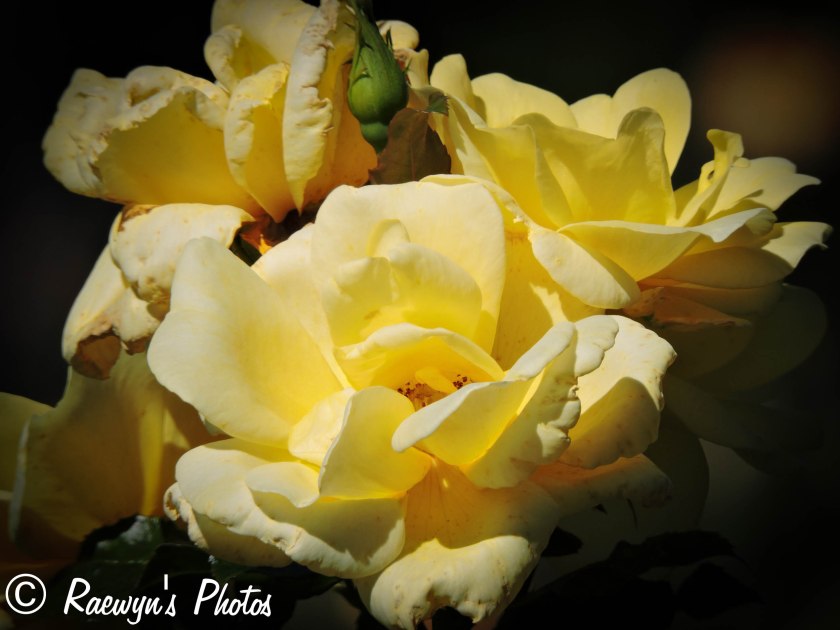 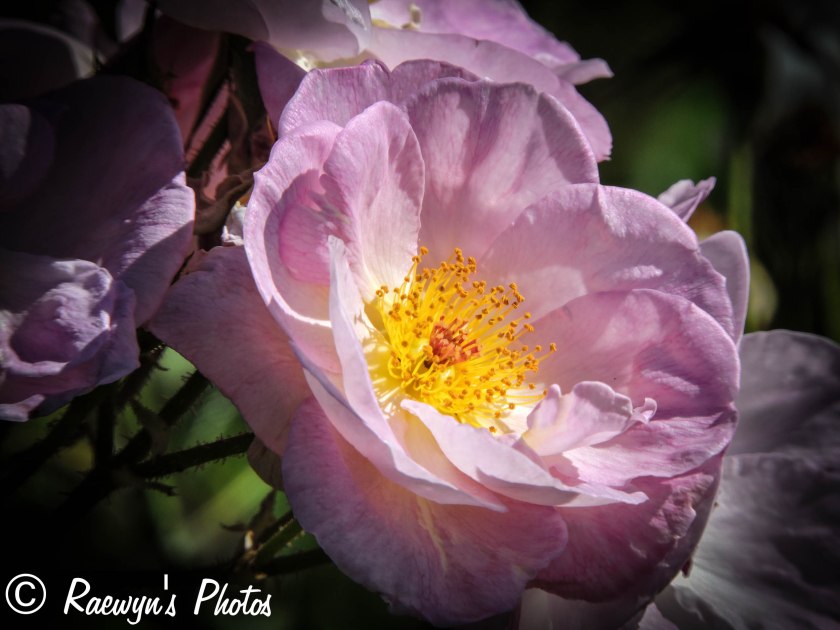 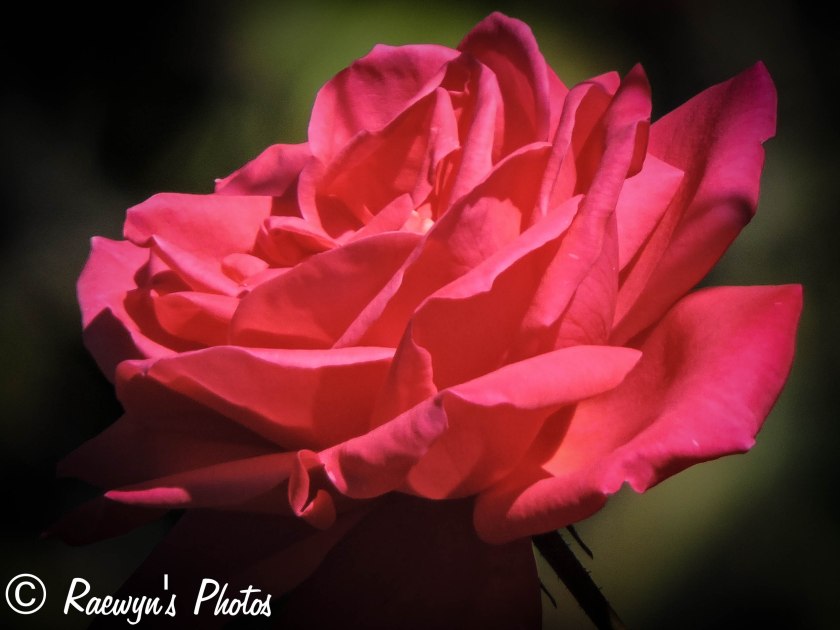 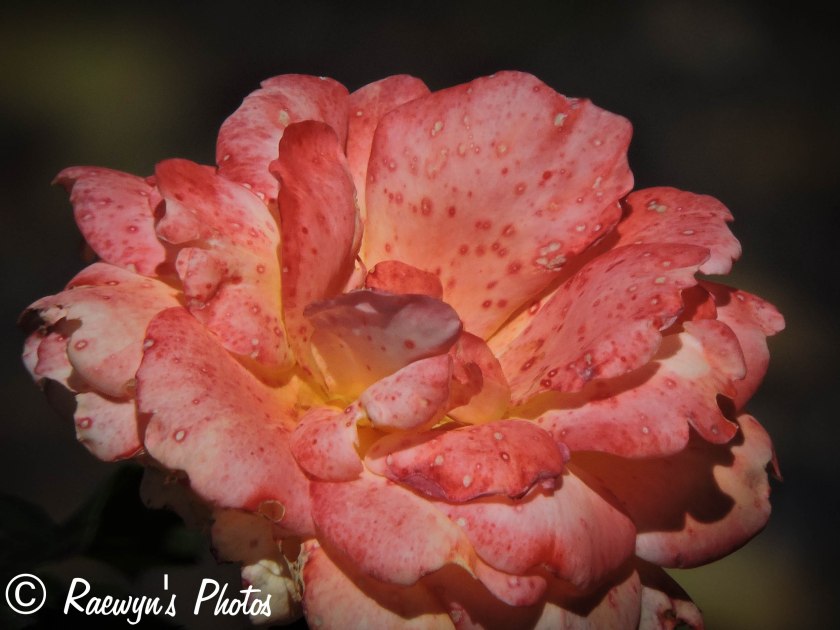 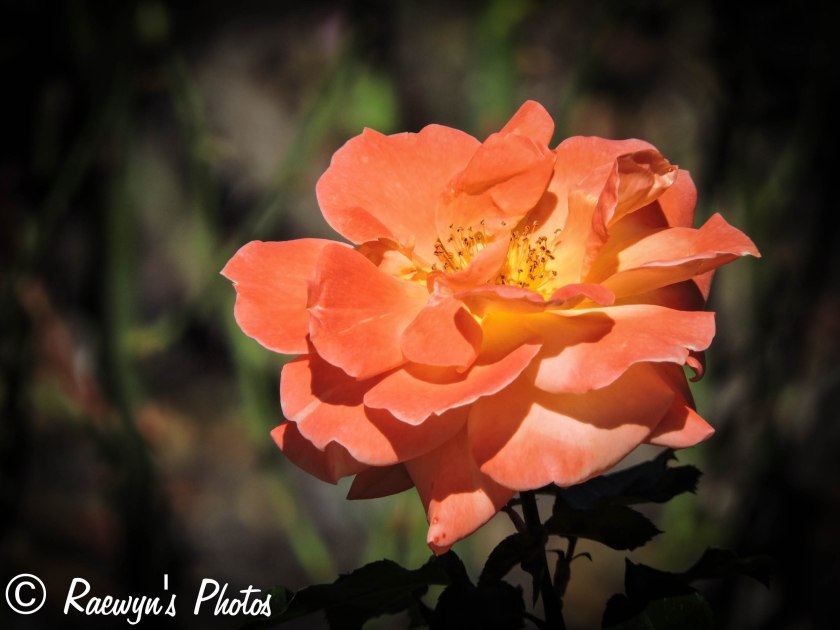 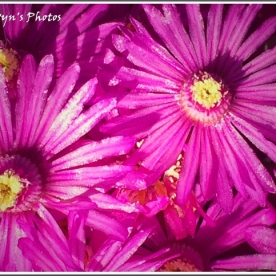 Good morning from a windy and hot Hastings.  We had some rain yesterday but it only made everything more humid and uncomfortable.  Even during the night.

So I decided to do a post of cheerful colours for Sally’s challenge. This is also to cheer up those snowed under.  Our days here are getting shorter, yours are now getting longer.  I saw that the groundhog has predicted another 6 weeks of winter.  so just enjoy the colours.

These photos were taken last October when my mother’s garden was in full colour for spring.  Now everything is dry and a fire hazard.  No colour left.

I have edited them on my computer with Photoscape and Fotor to enhance the colours. 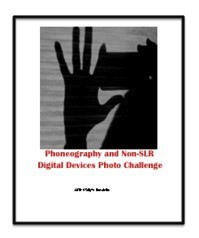 I have a new neighbour who creates her own jewelry from old silver cutlery.  Her work is amazing.  Anyway she also makes these bird feeders out of old cups and saucers.

I think it is adorable and a fun way to feed the birds.  She sits there, just like I do and watches and listens to them.  The birds are too fast now for her to take photos, just as they are for me.  They now know where the bread is to be found. 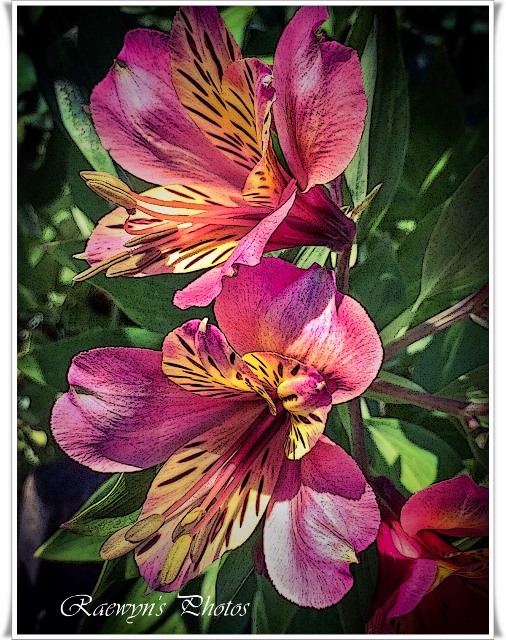 Good morning from a cool so so Friday.  Last night we had a massive thunder storm – we rarely get them here but this was a good one.  No I didn’t get out to try and capture the lightning flashes as it was raining too hard and I don’t have a tripod.

Onto something more colourful – Alstroemeria.  I googled these flowers and found this in Wikipedia.

Alstroemeria (/ˌælstrɨˈmɪəriə/; syn. Alstremeria),[2] commonly called the Peruvian lily or lily of the Incas, is a genus of flowering plants in the family Alstroemeriaceae. They are all native to South America although some have become naturalized in the United States, Mexico,Australia, New Zealand, Madeira and the Canary Islands.[3][1] Almost all of the species are restricted to one of two distinct centers of diversity, one in central Chile, the other in eastern Brazil. Species of Alstroemeria from Chile are winter-growing plants while those of Brazil are summer-growing. All are long-lived perennials except A. graminea, a diminutive annual from the Atacama Desert of Chile.

Plants of this genus grow from a cluster of tubers. They send up fertile and sterile stems, the fertile stems of some species reaching 1.5 meters in height. The leaves are alternately arranged and resupinate, twisted on the petioles so that the undersides face up. The leaves are variable in shape and the blades have smooth edges. The flowers are solitary or borne in umbels. The flower has six tepals each up to 5 centimeters long. They come in many shades of red, orange, purple, green, and white, flecked and striped and streaked with darker colors. There are six curving stamens. The stigma has three lobes. The fruit is a capsule with three valves.[5]

My mother has them growing wild in her garden at this time of the year.  It is just a mass of colour. 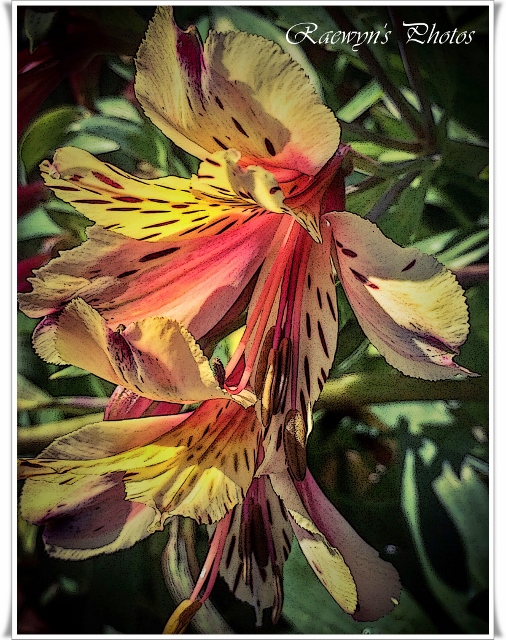 She used to pick them and take them down to a rest home to cheer up the residents.

I love this challenge by Cee as it is anything goes.

My mother was always a great gardener.  My memories of her as a child was her up at the crack of dawn working in either her veggie garden or flower garden.  We never bought any vegetables at all.  Her garden was the size of a house.  The only thing it was mainly dwarf beans which I can’t even eat now.  But everything was organic and healthy. She always had a showy flower garden.

Anyway due to her Alzheimer’s she has now stopped working in her garden and for the first time ever my father has organised someone to come in and work in her garden.  There are times she doesn’t recognise what are weeds and what aren’t.

But she has some lovely little ornaments around her flowers.  I found these cute worms among all her flower pots at the front door. These photos will always remind me of her and her gardens.

Thanks for visiting and here is Cee’s challenge to check out and a couple of other great photos.

A lingering Look at Windows shows a reflection of plant life in our garden.  That orange tree is loaded with really juicy mouth watering oranges.  There is nothing like going out into the garden to pick fruit right of the tree.

Many apologies for being so late but I have had major issues with my computer and now have my daughters old one.  That is a big improvement on my dinosaur but I still had problems getting onto my blog.

For those who want to know what this photo is:

I got two right answers,  Yes it is a knitting machine bed. I had a giggle at some of the comments.  I am definitely not musical so there is no chance of having a piano in the house.  Though I do envy those who do play.

Thank you for all your comments anyway.

So it is the start of a new month and the first week in the month for this challenge by Sally.

My photos were taken some time ago so again apologies if they are repeats.

My phone is getting so full with photo editing apps and my edited photos.  I don’t want to let them be deleted until I know where I am with my Mac computer.  I have managed to upload them onto this computer so they are safe for now.

These two images have been edited with Snapseed. 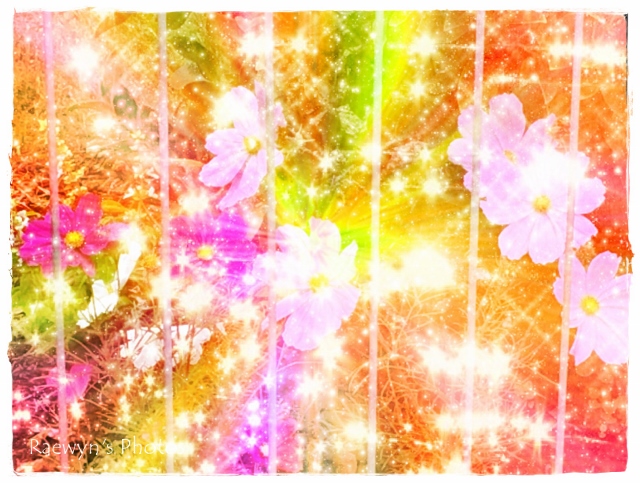 While this last photo was edited with another app which I can’t remember.  I have so much fun doing it that I can lose track of time and what apps I use.  The main thing to remember is the final image.

Thank you for visiting and for all your support.

I have been thinking about this challenge over the past few days while out walking.  In the end I looked for gaps in fences and letterboxes. I liked the idea of seeing something through the gap which then frames it.

Some fences were just wrought iron and  lets one see exactly what is behind it, unlike the first image where that was just a hole in the fence.

Then there are the wooden slats which don’t allow us to see mud.

I liked the idea of this triangle shaped letterbox which just allows us snippets of life behind the fence.

Then there is this letterbox with nothing.

Good morning from a cloudy Hastings Boxing Day.  Some will still be celebrating Christmas Day so I will still wish you a Merry Christmas.  My day yesterday was spent quietly with my parents and then skyping family.

Now it is back to some challenges.  I am so happy to see Sonel back with a new challenge –Sonel’s Corner Photo-Editing Challenge.  Her  split toning challenge was the first I took part in and it taught me a lot about photo editing.  So now the challenge has been broadened to include all areas of editing.  Right up my alley now.  It is sooooo much fun to play around with images.  They may just be so so but with editing you can add the wow factor.

These photos were taken yesterday in my mother’s garden.  I couldn’t help myself even on Christmas Day.  Actually it is a routine that when we visited her we had to go on a tour of her garden.  But she has been rather sick lately so that both the tours and her garden has been neglected.  So it was nice to see her out in her garden and showing me around.

I did quite a lot of editing last night and some of them went crazy when I uploaded them onto ViewBug.Com.

These have all been edited with FX Photostudio Pro.  I just upload the image and then go through the different filters to see what I like and what suits it.  As you can see I tend to use the vignettes a lot.  Mostly the black one.  I find that a lot of my photos are of flowers in the centre of the image.  So by using the vignette I really bring  the focus to the flower and the background really fades away.

I chose these ones for the different filters I used.

So enjoy the rest of your Christmas Day and Boxing Day.

Take care and thanks for visiting.