Nepenthes (/nɨˈpɛnθiːz/), popularly known as tropical pitcher plants or monkey cups, is a genus of carnivorous plants in the monotypic family Nepenthaceae. The genus comprises roughly 150 species, and numerousnatural and many cultivated hybrids. They are mostly liana-forming plants of the Old World tropics, ranging from South China, Indonesia, Malaysia and the Philippines; westward to Madagascar (two species) and the Seychelles(one); southward to Australia (three) and New Caledonia (one); and northward to India (one) and Sri Lanka (one). The greatest diversity occurs on Borneo, Sumatra, and the Philippines, with many endemic species. Many are plants of hot, humid, lowland areas, but the majority are tropical montane plants, receiving warm days but cool to cold, humid nights year round. A few are considered tropical alpine, with cool days and nights near freezing. The name “monkey cups” refers to the fact that monkeys have been observed drinking rainwater from these plants.

Nepenthes species usually consist of a shallow root system and a prostrate or climbing stem, often several metres long and up to 15 m (49 ft) or more, and usually 1 cm (0.4 in) or less in diameter, although this may be thicker in a few species (e.g. N. bicalcarata). From the stems arise alternate, sword-shaped leaves with entire leaf margins. An extension of the midrib (the tendril), which in some species aids in climbing, protrudes from the tip of the leaf; at the end of the tendril the pitcher forms. The pitcher starts as a small bud and gradually expands to form a globe- or tube-shaped trap.[3] 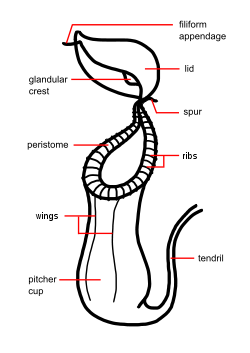 Basic structure of an upper pitcher

The trap contains a fluid of the plant’s own production, which may be watery or syrupy, and is used to drown the prey. Research has shown this fluid contains viscoelastic biopolymersthat may be crucial to the retention of insects within the traps of many species. The viscoelastic fluid in pitchers is especially effective in the retention of winged insects.[4] The trapping efficiency of this fluid remains high, even when significantly diluted by water, as inevitably happens in wet conditions.[5]

The lower part of the trap contains glands which absorb nutrients from captured prey. Along the upper inside part of the trap is a slick, waxy coating which makes the escape of its prey nearly impossible. Surrounding the entrance to the trap is a structure called the peristome (the “lip”) which is slippery and often quite colorful, attracting prey, but offering an unsure footing. The prey-capture effectiveness of the peristome is further enhanced in moist environments, where condensation may cause a thin water film to form on the surface of the peristome. When wet, the slippery surface of the peristome causes insects to ‘aquaplane’, or slip and fall, into the pitcher.[6] Above the peristome is a lid (the operculum); in many species, this keeps rain from diluting the fluid within the pitcher, the underside of which may contain nectar glands which attract prey.[3]

Nepenthes species usually produce two types of pitchers, known as leaf dimorphism. Appearing near the base of the plant are the large lower traps, which typically sit on the ground. The upper or aerial pitchers are usually smaller, coloured differently, and possess different features from the lower pitchers. These upper pitchers usually form as the plant reaches maturity and the plant grows taller. To keep the plant steady, the upper pitchers often form a loop in the tendril, allowing it to wrap around nearby support. In some species (e.g.N. rafflesiana), different prey may be attracted by the two types of pitchers. This varied morphology also often makes identification of species difficult.[3]

Prey usually consists of insects, but the largest species (e.g. N. rajah and N. rafflesiana) may occasionally catch small vertebrates, such as rats and lizards.[7][8] There are even records of cultivated plants trapping small birds.[9][10] Flowers occur in racemes or more rarely in panicles with male and female flowers on separate plants. They are insect-pollinated, the primary agents being flies (including blow flies, midges, and mosquitoes), moths, wasps, and butterflies.[11] Their smells can range from sweet to musty or fungus-like.[12] Seed is typically produced in a four-sided capsule which may contain 50–500 wind-distributed seeds, consisting of a central embryo and two wings, one on either side (though see N. pervillei).

The genus is cytologically diploid, with all studied species having a chromosome number of 2n=80.[13][14] This high number is thought to reflect paleopolyploidy (likely 8x or 16x).

Good morning from a very chilly frosty Hastings. At least we will see the sun today which makes a change.

This week Cee from Cee’s Photography has asked us for our black and white houses.  So I have gone for a turtle carrying his house everywhere he goes.

Then there is this bird’s nest which  has fallen off the tree.

And some houses down my street.  These type of houses are condemned as they will be replaced by more modern housing.

I have my social snappers today so will catch up with your blogs later today.